Big Al Swaim has had a profound effect on youth in the River Valley.

VAN BUREN – In the 1990s, the city of Van Buren desperately needed help with the construction of the Field of Dreams complex.

When John Riggs was elected mayor in 1995, he turned to Alan Swaim.

Swam, being the avid baseball fan that he is, knew the value of a good reliever. He had just sold his office supply business, Paper Clips, and was really deciding what to do next.

“I wasn’t sure what I wanted to do in the future,” says Swaim. “(Riggs) called me and asked if I was willing to take on the field of dreams. He had hit a brick wall. It was a long way to go.”

Only the first four fields at the entrance of the building were built.

Swam came in and led off the end of the set by adding seven more pitches, including two full-sized baseball diamonds. The Van Buren Pointers still play in one of the most beautiful high school parks in the state, high above Lee Creek in the Vista Hills complex.

“At that time, people told us we had a major facility in the state,” Swaim said.

“We had an army of volunteers for those World Series,” Swaim said. “We had over 300 volunteers who helped with each one. We were very proud of our town back then. I’d give anything for a group of young businessmen and women to start over. I have boxes. From the notes I took and the sponsors we had and how we raised the money. I’d love to give that to someone.”

In the year In 2008, Swaim, also known as Big Al, received the Babe Ruth Baseball Organization’s Volunteer of the Year Award for volunteer service in the nation.

“His leadership role in bringing the Babe Ruth World Series to Van Buren is well known,” said a Babe Ruth baseball press release. It serves as a training ground for World Series hosts.

“It just destroys me,” says Swaim, taking lyrics from a John Conley song. “I’m just an ordinary guy who drives a shared car.”

Swaim ran Field of Dreams from 1996 to 2012, organizing races, preparing the fields and providing any necessary maintenance.

“The 17 years I worked there were the best of my life,” says Swaim. “If you love kids and you love baseball, what could be better than working on the ball fields. This is as good as it gets.”

Swaim coached American Legion baseball for 14 years, including the Crawford County Legion team from 1981 to 1988 for Fort Smith Coca-Cola and from 1990 to 1995 for Paperclip.

The Coca-Cola teams have won the district tournament four out of eight years and advanced to the State American Legion Tournament.

American Legion baseball was at its peak in Fort Smith at the time with Kerwin and Ernest R. Coleman (ERC) also supporting top teams.

“We’ve won the district tournament four years and made it to the finals once and won the other four,” Swaim said. “Any of the three could have won the state tournament any year. They were good.”

Swaim took the Coca-Cola team to Fayetteville one season, and before the game, the home plate umpire explained what the strike was to the coaches at the pregame plate meeting.

Having coached baseball in the grassroots, Swaim, like many old-timers, doesn’t like the direction of professional baseball these days.

“I watch pro ball, and it drives me crazy,” Swaim said. “They can’t swing, they won’t hit the cutoff man, they slide the bases, they change pitches every five at-bats. The good old days of strength and hard-nosed baseball are over.”

Then there’s the personal protective equipment players use when building the base.

“What are those? Oven mitts,” Swaim said. “If I were playing right now, I’d get a 24-inch-long baking pan. How often are you okay or out by an inch?”

Last spring, Swaim and two old friends checked off the bucket list when they rented the farmhouse, field and lights at the original Field of Dreams in Dyersville, Iowa. Same name.

“It was 38 degrees that night at 7 o’clock and we went out and played baseball,” Swaim said. “It was so much fun. We’re in the farmhouse that night. They put on a movie called Field of Dreams so you can go around and touch things you see on TV. It’s really cool.”

Swaim had a sports memorabilia store on Main Street called Van Buren’s American Pastime, along with a soda fountain and sandwich shop at one point.

“It was good,” Swaim said. “People have been telling me we’ve been right there with Cooperstown for as long as I can remember. I went to Cooperstown a few years later, and they were wrong. It’s great. I love the Negro Leagues Museum in Kansas City. It’s the same. Awesome. I’m just a baseball nut.

Swaim recently returned to coaching, coaching his grandson, Carson Kurd, now 13, from ages 8 to 11. His daughter, Kelly, is married to Brian Kurd, a shortstop at Southside and for ARC.

“It was more than cool, it was awesome,” Swaim said. “That whole team was fantastic to coach. That team was from Alma except for one, Ozark.”

Health issues forced Swaim to retire from coaching. He has had two fatal heat strokes, has type 2 diabetes that requires four injections a day, neuropathy and Parkinson’s disease, and was recently diagnosed with temporary arthritis.

“Every day is a blessing,” Swaim said. “The first thing I do when I wake up in the morning is thank God. People tell me I’m tough, I’m not strong, I’m blessed. My grandkids keep me going. I’ve made it through this whole event. It’s nice to see.”

Last month, Swaim was asked by Jerry Glidewell and the Boys & Girls Club of Fort Smith to throw out the first pitch for the AA American Legion State Baseball Tournament at the restored historic Hunt Park.

“I didn’t know this, but they had my 1985 team join me right there,” Swaim said. “I was surprised by that. That team finished No. 1 in the state. They went up to the mound with me, I threw the pitch, and we prayed right there on the pitcher’s mound while both teams were on the field in order. Home: Then we went to Calico County to eat. The best of my life.” It was one of those nights because I didn’t know they were going to be there.

That game reunited Van Buren with Fort Smith, the two cities Swaim represented during his coaching career at the American Legion.

In between coaching and watching his grandchildren play, Swaim took on a new project of finding and donating baseball gloves. Last year he gave about 100 gifts and now he has another 120 that he plans to donate soon.

“I give them to underprivileged children,” Swaim said. “The look on a child’s face and their parent’s face is priceless, and that warms my heart. That’s my new mission.” 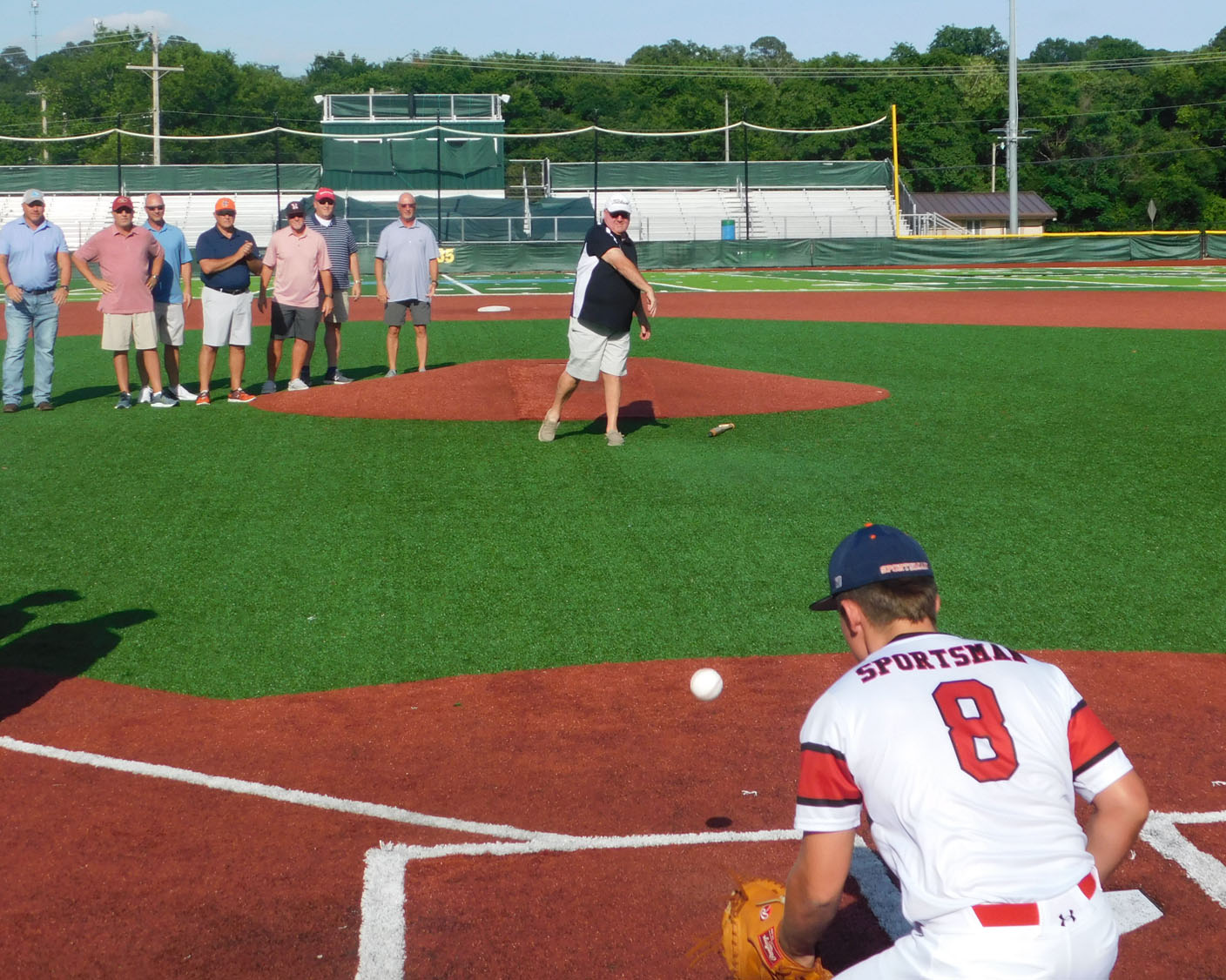 Alan Swam delivers the ceremonial first pitch during the AA American Legion state baseball tournament at Hunt Park in Fort Smith. Swaim was honored before the game for many years as an American Legion baseball coach in River Valley. Photo courtesy of Jerry Glidewell, Fort Smith Boys and Girls Club

Hockey Day Minnesota is coming to ‘Hockeytown USA’ in 2024